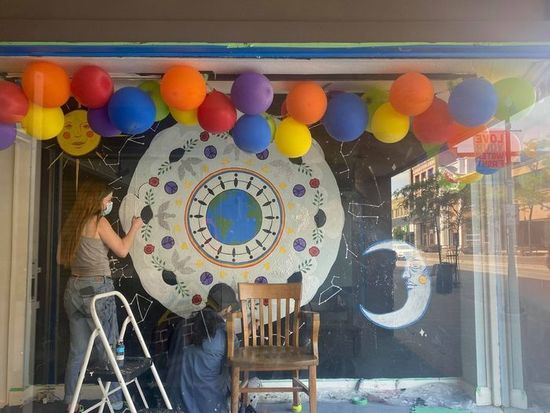 Nicholas Nicholls was a young man murdered in Downtown North Bay in early December 2021. He was the nephew of Gateway To the Arts Owner Karrie Emms. Ms. Emms has been in the planning stages of a new youth arts hub in the downtown core which would be a place open to all users 13-30 facing a variety of issues such as those her nephew faced. She never dreamed the center would end up bearing his name due to his tragic death. The events of the last month have made her, Gateway To the Arts and her family more determined than ever to open 'Nick's Place For Us' in the old Gulliver's downtown. The building needs a total revamp and this fundraiser will support part of that though in it's early stages.

The fundraiser includes 2 separate Valentine's experiences each for 2-4 people. The include:

Catered Dinner for up to 4 people.
Couples Art Project led by one of our talented artists for up to 4 people.
A gift designed in consultation with the winning bidder for their significant other.
Bottle of wine.
Valentine's Day Basket to take home.
A piece of original art.
4 hours in one of our two decorated and cozy up event spaces.

The bidding for each package begins at 250.00. They are valued at over $600.00 each and given the current climate of COIVD will allow two lucky groups to get out to in-person events on Valentine's.

Each package will be custom designed for the winner and will be sure to excite each participant. Given that we have two event spaces we can offer these packages to our lucky winners.

Let's support a great local downtown initiative that will help our local youth navigate the current climate of our world by giving them a center rich in non-threatening art experiences from culinary to visual and performing arts. The center will partner with many local organizations and businesses to provide leadership skills school success and a safe place to be free of any banners and titles. It is simply... Nick's Place For Us!

About Nick's Place For Us

A Place for Us has been an initiative slowly gathering steam in the downtown core of North Bay. It is quite simply a place where youth primarily 13-30 can come and take part in positive arts experiences which will also teach leadership skills, school success, job readiness and community involvement through non-threatening visual, performing and culinary arts. The vision has been to renovate the old Gulliver’s Bookstore and turn it into the youth-based center.
The initiative has been started by Gateway To the Arts, an artists co-operative which happens to occupy the store next door with gallery and workshop space. Started during the summer months plans to open and operate the new space have been chugging along behind the scenes with a GoFundMe fundraiser and many grant applications as well as a few fundraisers in the works.
“We realized, in operating Gateway To the Arts, there was a large need for youth centered art opportunities in the city whether a working artist or someone who just likes to dabble. There are music teachers looking for space, art instructors wanting to run workshops and people who genuinely want to be involved with young people in the city. But, there are not a lot of community spaces to run these programs,” said Karrie Emms, co-owner of Gateway To the Arts and the new A Place For Us.
In December, 2021 the drive to create the new center took on a new focus for Emms and her business partner Dani-Lynn Redgrift-Berthelot a photographer from Sudbury. On December 4, 2021 during a vendor market which was a fundraiser for the new center Emms’ nephew was killed in a brutal murder not two blocks from the proposed location. Nicholas Nicholls was 27-years-old at the time of his death. He had battled addictions most of his teens and adult life despite the efforts of family to get the help he needed.
“What people don’t realize is that there was a person behind the addiction,” said Emms, “Nicholas was a lively little boy who could wrap you around your finger with one smile but his huge heart and hard-working nature got lost behind the wall of addiction and likely mental health. He was for all intent and purpose a little boy lost in a world he couldn’t escape from, but he was loved and I don’t believe he wanted to be in that world just like most who are stuck there. But there really is a lack of services and with addictions and mental health or simply with social issues facing marginalized youth services cannot be a one size fits all approach,” she added.
The morning of the stabbing his grandmother had dropped him off at the local safe-bed program and the question will always remain for the family as to whether or not this would have been the attempt at help that would have worked. Would Nicholas have turned his life around had he not met his murderers that morning? His family admits they will never know the answer to that question. But, they do want some good to come from his death.
“I still have days where I want his to walk infront of my store just so I know he is okay but, I know that will never happen. I know Nicholas is gone. We opted to donate his organs before we knew he had signed a donor card himself, but that is who he was. He loved his daughter and his family and most of all we have to believe he would want us to create this space to help other youth who may feel like they have nowhere else to go. Youth who just need to fit somewhere and need to have someone recognize their worth. With a lot of people who turn to this lifestyle there are personal demons event they may not understand,” said Emms
In memory of Nicholas Emms and Redgrift-Berthelot in consultation with the family have decided to rename ‘A Place For Us’ to ‘Nick’s Place For Us’. The hope is to begin renovations in the spring while maintaining some of the history and esthetics of the old bookstore at 157 Main St. West. Nick’s Place For Us is incorporated as a Not-For-Profit business and in keeping with the history of the old store which for years provided educational games and books and supported local writers and artists the owners feel strongly it should keep on giving to the downtown and the community.
The renovations will include redoing the main floor into a multipurpose space featuring reconfigurable spaces for visual and performing arts and workshops, upgrades to the storefront including windows, doors and façade, adding a main floor washroom office and industrial kitchen facilities as well as a backdoor and upgrades to the basement making it useable space as well as all electrical and HVAC upgrades needed.
The center will work with local organizations and artists to provide programming, local health organizations and educational facilities as well as employing youth interns to provide on the job training and experience. They are currently developing their board of directors and connections to supports in the health fields who can help to set up relevant programming.