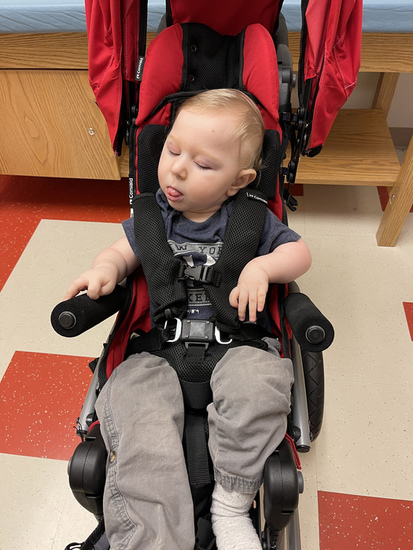 Hypomyelination with atrophy of basal ganglia and cerebellum (H-ABC) is a disease that affects certain parts of the brain. Symptoms usually begin in infancy or early childhood and worsen over time. Severity of symptoms and rate of progression can vary.[1] Symptoms may include delayed motor development, learning difficulties, upper-motor neuron dysfunction (spasticity, exaggerated reflexes, and Babinski signs), dystonia, rigidity, involuntary movements, and speech and swallowing problems.[1]

H-ABC is caused by a mutation in the TUBB4A gene. Inheritance is autosomal dominant, but most cases are due to a new mutation occurring for the first time in a person with the condition.[1][2]

Treatment may involve taking medications to ease symptoms, physical therapy, and surgery when dystonia does not improve with medication.[1]
(Credit https://rarediseases.info.nih.gov/diseases/10917/hypomyelination-with-atrophy-of-basal-ganglia-and-cerebellum)
My son, Christian was diagnosed with this condition in August, 2020. He’s 2 years old and unable to sit-up on his own, walk, talk or eat independently. He is currently fed mainly via G-tube (a tube inserted into his stomach for nutrition), and we travel from Vt to Boston and Philadelphia a few times a year for medical care and supportive therapies.
The University of Massachusetts Medical School, with Dr. Guangping Goa is conducting research for a gene therapy to stop the disease progression. The hope is once the disease is stopped, the myelin (the part of the brain affected) will start to form. Myself and the 200 other families impacted by this world wide are in a race against time to find a cure. All funds raised via this auction will directly fund Dr. Gao’s research.

All funds raised via this auction will go towards research currently underway at the University of Massachusetts Medical School for H-ABC Leukodystrophy.