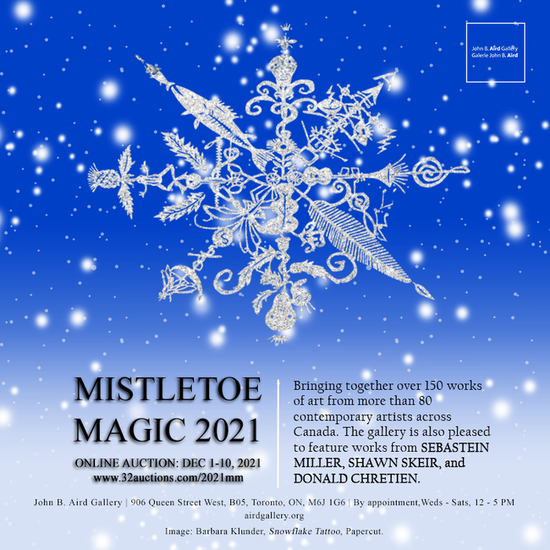 Art up your life!

We're delighted to invite you to its 33rd edition held online via 32Auction.com between December 1 to 10, 2021.

Each year, Mistletoe Magic raises much-needed funds for the Aird Gallery's year-round programming, which includes up to 9 exhibitions per year with online publications , increasing the gallery, the participating artists, and other arts organizations visibility while remaining free of charge to the public.

This highly anticipated event brings together over 150 works of art from more than 100 contemporary artists across the province.

The gallery is also pleased to feature three renowned artists at this year’s fundraiser. This year’s featured artists are Donald Chretien, Sebastein Miller, and Shawn Skeir!

Crucially, the funds raised from this year’s online event will be used to support the Aird as we continue to program exciting contemporary art in the oldest Artscape building in Toronto.

MISTLETOE MAGIC 2021 is live from December 1 - 10. So shop early to avoid disappointment!

FEATURED ARTISTS
The unique style and impact of Aboriginal fine artist Donald Chrétien spring from his combined passion for colour and woodland-style expression. His ongoing exploration of his heritage has him concentrating on distinct features of Ojibwe clans' acrylic on canvas. His works are exhibited in some of the most interesting corners of North America. His Vancouver Olympics installation piece, titled: Ngashi Nijii Bineshiinh or Mother, Friend, Small Bird, is on permanent display in Vancouver's Pacific Coliseum and stands 12 feet high by 80 feet long.

Born in Nova Scotia and currently based in Toronto, Shawn Skeir studied at the Nova Scotia College of Art and Design and George Brown College. Skeir's vibrant and energetic artworks have been exhibited throughout Toronto and in the United States and are in numerous private and public collections. Influenced by the ongoing change of pace and the people of the contemporary city, the artist explains, "I want to express a feeling of unity with movement as a reminder that we should celebrate our diversity and draw from each other’s cultural and traditional experiences." The artist works out of the self-named Skeir Studio Gallery in downtown Toronto.

About John B. Aird Gallery

The John B. Aird gallery is a safe contemporary art exhibition space where visual culture can be shared and explored by an audience as diverse as its makers.

Established in 1985, it was named in honor of the 23rd Lieutenant Governor of Ontario to recognize his support of the visual arts in the province and in Canada. As a non-profit entity the Gallery’s mandate is to create awareness and promote the enjoyment of works of art by professional contemporary artists.

One of the few remaining public art galleries in Toronto and operating for over 30 years as a non-profit and registered charity, we connect people to ideas – where contemporary art is presented, discussed and enjoyed. We are a space where visual culture is shared to inspire, where communities connect with each other, and where artists are supported throughout their career. 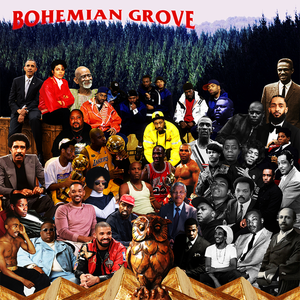 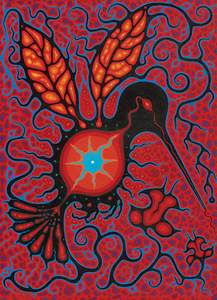 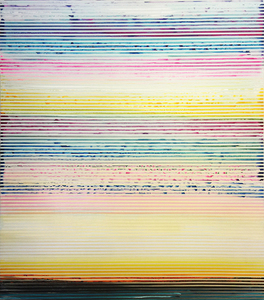 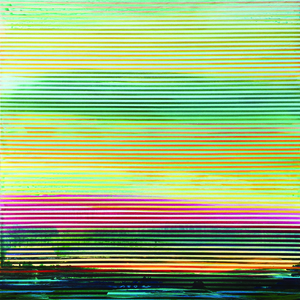