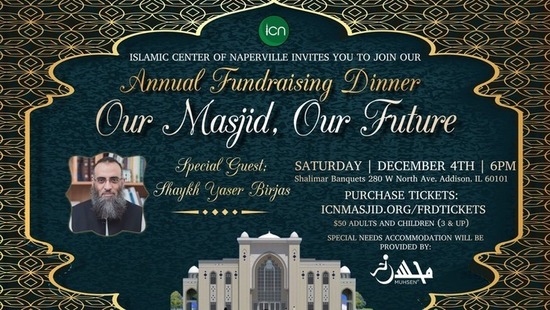 This is a silent auction for the ICN fundraising dinner for 248 masjid.

About Islamic Center of Naperville

Islamic Center of Naperville – A Historical Perspective The Islamic Center Of Naperville (ICN) was formed in 1991 as a non-profit organization under the laws of the State of Illinois, for the specific purpose of serving the religious and cultural needs of the Muslims living and /or working in the Naperville area and its surrounding cities and towns.

The actual roots of ICN, however go back farther than 1991. In 1970-80 a group of far-sighted Muslims established the Naperville Islamic School as an affiliate of the Muslim Community Center (MCC) in Chicago. The “weekend” school was held on Friday nights to save money. The classes met first at Naperville North High School and then at Woodridge School on Hobson Road in Lisle.

By 1983, the group had raised $15,000 for the purpose of acquiring a building for a Masjid but postponed their plans when the Islamic Foundation bought an old school building in Villa Park. In 1984, some members of this group, with the help of other brothers, formed the Qur’anic study Club at Bell Laboratories, a prominent area employer of high quality personnel. (Most Muslims joining Bell Laboratories chose to live in Naperville and its surrounding cities and towns). Regular Jumu’ah prayers in the area were started at Bell Laboratories at this time. At the same time Jumu’ah was being established at Bell Laboratories, some brothers started gathering in their homes for regular Isha’ prayers. Also Salaatul Taraweeh was being held regularly at homes of the community members.