The Mohala Hou Foundation was established by Keola and Moana Beamer as a non-profit organization in September 2007 to support and promote the teaching and sharing of Hawaiian music, dance, language, and culture, around the world. Check out some of their prograqms at https://mohalahou.org/worldukulele/

To lend a helping hand to the Mohaha Hou Foundation I built a tenor ukulele made of select curly koa that has been part of my collection since I moved to Maui in 1982. It has an African ebony fingerboard, bridge and peghead overlay, and light-colored curly koa bindings. Its rosette is also of curly koa, bordered by two 5-ply rings of multi-colored wood, which also trim the body and peghead. The neck is made from Honduran mahogany. I will probably string it with low-G tuning, since that's what the majority of my uke customers prefer. I will include a saddle that is designed (intonated) for re-entrant (high G) tuning so that the uke will tune optimally for either tuning.

Also being auctioned to benefit Mohala Hou is a very rare early 30's Martin Style O soprano uke that, to me, looks like it was played very sparingly, if at all, since it was built. It is in mint + condition, with its original case, and even has its original gut strings in the case.

Steve Grimes has built Archtop and Double Sound hole Flat top guitars for some of the top players in the world. He specializes in custom tailoring his guitars to suit the tonal, aesthetic, and playability requirements of his customers. 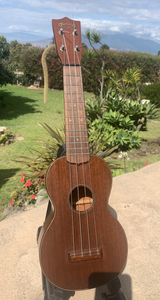 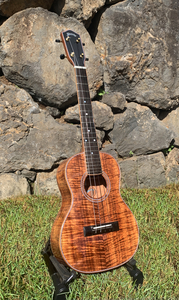