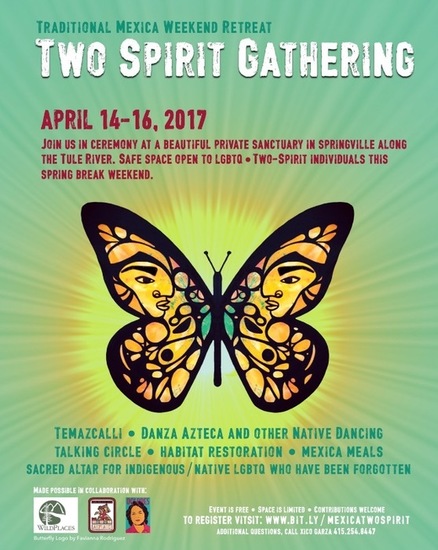 Funds are being raised to cover travel expenses for three spiritual leaders who will help lead the ceremonies.

A Gathering of Two Spirit People is being organized on the Tule River in the southern Sierra Nevada Mountains of California within the Giant Sequoia National Monument to be held April 14-16th, 2017.

Two Spirit (also two-spirit or twospirit) is a modern term used to describe certain spiritual people who may also be gay, lesbian, bisexual, and gender-variant. "Two Spirit" is not interchangeable with most words currently used in western culture such as LGBTQ, Queer, Gay, etc. This title differs from most western, mainstream definitions of sexuality and gender identity in that it is not so much about whom one sleeps with, or how one personally identifies; rather, it is a sacred, spiritual and ceremonial role that is recognized and confirmed by the Elders of the Two Spirit's ceremonial community.

Registration is required for this free event. Complete fields below. Upon registration, you will be directed to receive, review, and complete (where requested) the following:

1. Liability Waiver and Meidical History are required. Complete and return by email or bring it along when you come.
2. Guidelines for the Land upon which the event is held.
3. Personal/Suggested Gear List
4.Map Directions
5. FAQ

The Land is a 12-acres homestead located on both sides of the Tule River at about 1,200 feet elevation in the Blue Oak Woodland foothills in the southern Sierra Nevada within the Sequoia National Forest/Giant Sequoia Natioanl Monument. The people who live, work, and play there are the stewards and do their best to protect and enhance (when possible) the natural qualities of this land.The weather predicted at event weekend is warm (60's) and clear (sunny) during the days and cool (40's) at night.