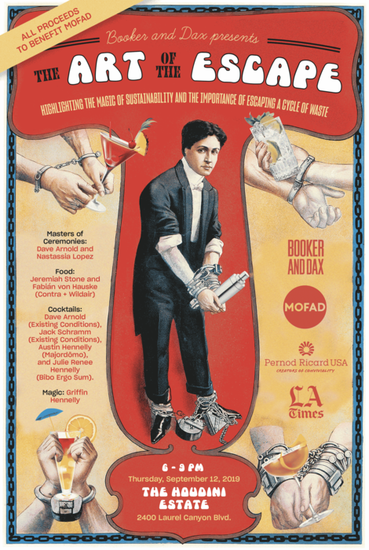 Booker and Dax Lab is partnering with The Museum of Food and Drink (MOFAD) for an evening dedicated to the art of the escape. The first official MOFAD function on the west coast will be held in the Hollywood Hills at Houdini’s Estate and will raise awareness for MOFAD while highlighting the magic of sustainability and the importance of escaping a cycle of waste.

Special thanks to our partners at Pernod Ricard and The LA Times for making the magic happen.

All food and beverage offerings will inject an extra dose of spectacle while emphasizing minimal waste and the importance of biodiversity and sustainability. Dave Arnold and Jack Schramm (Existing Conditions) will create the cocktail program in collaboration with Austin Hennelly (Majordōmo) and Julie Renee Williams (Bibo Ergo Sum). The Booker and Dax Spinzall will be heavily featured due to its ability to increase yield and produce delicious byproducts that will then be featured in other food and beverage offerings for the evening.

Guests will have the opportunity to interact with the hosts of the Cooking Issues podcast and partners of Booker and Dax Lab, Dave Arnold and Nastassia Lopez, as well as renowned food science expert, Harold McGee. As no night at the Houdini Estate would be complete without an escape artist, Austin Hennelly’s brother, a trained magician and showman, will give an exclusive performance during the party.

Fundraising for MOFAD consist of a live auction as well as proceeds from a select number of tickets raffled off to Cooking Issues listeners.

About Museum of Food and Drink

MOFAD is a new kind of museum that brings the world of food to life with exhibits you can taste, touch, and smell. We inspire public curiosity about food, what it means, and how it connects with the world around us.