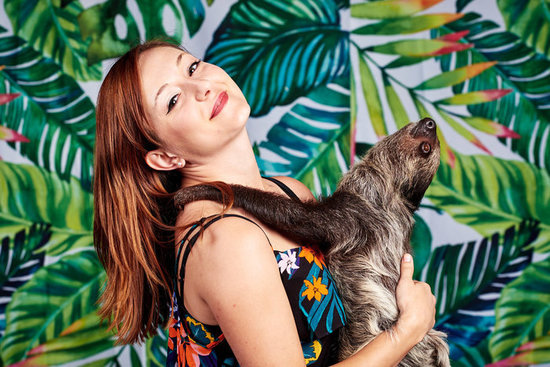 All of our general admissions slots have sold out to meet Henry the Sloth, but we have one additional spot available for auction at 4:15pm!

Our pal Henry the Sloth is coming back to the Central Collective, and he wants to meet you! Unlike most sloths, Henry is comfortable with humans because his parents had him in captivity after being relocated from Guyana due to deforestation and rampant poaching in the region. We’re so lucky for the opportunity to meet a sweet little dude like Henry, and to support the amazing educational and preservation mission of the Wildlife Discovery Center. Read more about Henry, his family and the WDC below, and then book your spot to have your picture taken with Henry.*

Each slot includes a ten minute photo session with 1-2 people and access to downloadable photos of your visit via an online gallery. Proceeds go to the Wildlife Discovery Center.

Henry is a one and a half year-old, Linnaeus Two-Fingered Sloth. He was born at a wildlife rescue facility near Miami and his parents originated from Guyana and due to deforestation and rampant poaching in that region, had to come into captivity. Henry is part of the Species Survival Plan to be part of an assurance population in North America and make sure that this species doesn’t go extinct. Henry now resides with the Curator of the Wildlife Discovery Center where he receives specialized care and lots of TLC.

Henry will be joined by Rob Carmichael. Rob is the founder/curator of the Gold Medal Award Winning Wildlife Discovery Center. In addition to his curatorial duties, he also works with National Geographic and Smithsonian Channel in a number of wildlife documentaries. He has teamed up with 7-time Emmy Award winning cinematographer Neil Rettig. Rob also speaks at a number of international symposia including the International Union of Conservation of Nature's Crocodile Specialist Group. Rob teaches Environmental Biology and Herpetology at several nearby colleges. He is married to a school teacher/coach who is earning her doctorate in education, and, two very talented daughters who are professional athletes and work for Naked Foods!

The WDC is an award winning, accredited, free admission zoo/nature center with a mission to motivate all generations to come to know, respect and protect our challenged and often endangered ecosystems with a focus on their wildlife. This nature center features over 200 species of animals including reptiles, amphibians, fish, birds and mammals and focuses on wildlife and ecological conservation.

About The Central Collective

The Central Collective is a mixed-use creative space for entrepreneurship, events and engagement with Knoxville’s creative community.