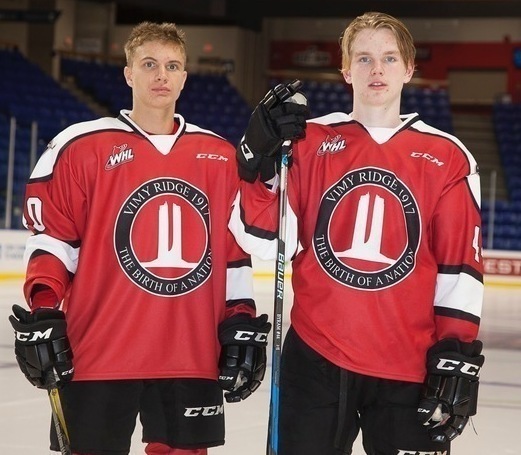 View All Items
START
31
END
07
+ Extended Bidding
Have a question about our auction? Contact Us

The Vancouver Giants will pay their respects to our active and our fallen heroes who fight and have fought for our daily freedoms. On Friday, November 3rd and Saturday, November 4th the Vancouver Giants will be wearing these commemorative Vimy Ridge jerseys when they face the Kamloops Blazers in a home-and-home series. Proceeds from this auction go towards the Vimy Foundation.

MISSION
The Vimy Foundation, founded in 2006, is a Canadian charity with directors and members across the country.

The mission of the Vimy Foundation is to preserve and promote Canada’s First World War legacy as symbolized with the victory at Vimy Ridge in April 1917, a milestone where Canada came of age and was then recognized on the world stage.

The Foundation carries out its mission by:

The Government to hold the public commemoration for the last First World War soldier on Vimy Day 2011;
The Vimy Memorial to be placed on the new $20 bill;
Governments across the country to lower their flags on Vimy Day; and
Successfully hosted gala events across the country celebrating Vimy Day
A Brief Overview
Inspired by the heroic victory of the Canadian Forces at Vimy Ridge, the Vimy Foundation believes that the key to a successful future lies in knowing one’s past, and that the remarkable story of Vimy should be shared with young people from across the country.

A Dominion Institute poll taken at the time of the 90th anniversary of the Battle of Vimy Ridge revealed that only 30% of Canadians recognized the unique importance of the event in the nation’s history. This startling statistic suggests that many Canadians do not immediately recognize the significance of this battle, and how its legacy contributed to Canada’s emergence on the world stage.

To meet this challenge, the Vimy Foundation has taken the initiative to share the remarkable story of Vimy with Canada’s youth.

To promote Vimy Day, the Foundation also encourages Canadians to wear a Vimy medal or pin on April 9th each year, and is organizing commemorative events each April. The Foundation is also hard at work developing plans for the celebration of the 100th anniversary of the Battle of Vimy Ridge in 2017.