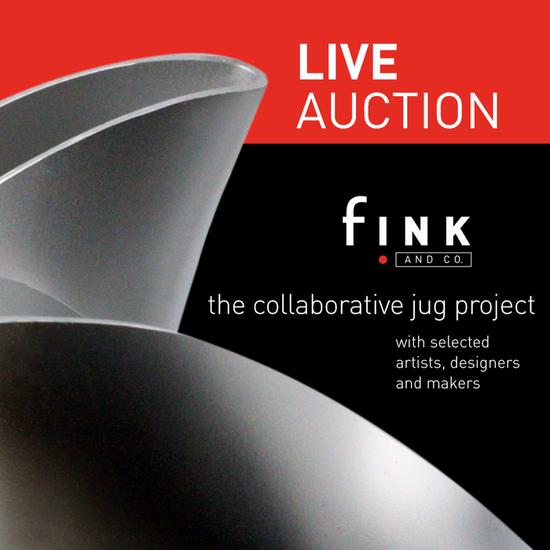 The FINK Collaborative Jug Project pays homage to the late Robert Foster, designer and founder of FINK & Co, who was tragically killed in a car accident in 2016 and is deeply missed. FINK & Co has a long history of collaborating, mentoring and supporting fellow artists, designers and craftspeople. Fifteen creatives have been chosen for this project, all of whom have had a direct connection to Robert and/or FINK over the 27 years of the company’s history. The 15 designers/artists have been tasked with responding to this iconic Australian design object in the manner of their own choosing, informed by their personal practice. Each designer has been provided with a blank FINK jug with which to begin. The finished bespoke artworks created as a result of this collaboration will be auctioned live online.

This is a true collaboration. The designers have worked closely with the Fink team to realise their designs. This diverse group of sculptors, jewellers, glass artists, graphic designers and metalsmiths have thrown their enthusiasm into the project and a wide array of different approaches have emerged. The Fink team has worked through many challenging and complicated technical issues in a variety of mediums to produce the finished works, with individual jugs taking up to six attempts to perfect. This is a true testament to the amazing skills and innovative approaches that the FINK Team has brought to the project and to their enduring embrace of Robert’s personal motto “Never say it can’t be done”.

A percentage of the profits to be donated to Headspace, Canberra. We strongly believe in giving back to our local community who have been so generous in supporting us, and we know how important mental health is for community at large, particularly in times such as these.

FINK is one of only a few design companies that solely manufacture in Australia. First recognised for its distinctive Water Jug, which has been labelled as an Australian design icon, FINK also produces 30 high-quality homewares, lighting, as well as a range of jewellery. FINK is brand name synonymous with spirited and distinctive Australian design.
With over 27 year of manufacturing experience, every piece in the F!NK range has its own story of development and usually involves some form of technical and aesthetic innovation. Each product has its own comical persona, reinforcing the quirky and unique nature of its distinctive design. Particular attention is given to the functionality, performance and the quality of making and finishing. Our vision has been to produce innovative objects that challenge other utilitarian objects.

F!NK & Co produces high-quality homewares, lighting and a range of jewellery unlike any other. Every piece is individually hand finished which results in an object embedded with its own unique characteristics—more like a piece of art. FINK prides itself in developing unique and bespoke processes to produce each piece.
FINK is made up of a small dynamic team where everyone is involved in all of the process of making and everything is made within the FINK workshop. Some of our product require up to 25 different steps to make the finished product.

Of particular importance to F!NK is the notion of the combination of traditional craftsmanship and artisanal practices alongside innovative contemporary manufacturing techniques. The F!NK range of well-designed and articulated objects is particularly attractive to the discerning market that wants something extraordinary.