Local artists have donated pieces to us to auction for the benefit of the Waltham Arts Council projects - helping pay the last bill for the 2020 concerts on the Common, give our annual donation for Veterans Night Out on the Common, and keeping us going operationally!

In the spring of 1975, Dr. Frederick J. Stokley, Superintendent of the Waltham Public Schools, invited over one hundred people to attend a series of meetings with the purpose of forming an Arts Council in Waltham. Subsequently, an acting Board of Directors was formed and began working on the tasks of writing By-Laws, becoming incorporated as a non-profit organization with tax exempt status, planning for an Arts Festival, presenting art programs, publicizing art events in the community and seeking funds.

In October, an afternoon tea was held at the Robert Treat Paine House attended by over three hundred people to publically announce the formation of the Waltham Arts Council.

The first major fundraising activity was a concert in April by Arthur Feidler and the Boston Pops held in the auditorium of the Waltham High School. The next major activity funded by the Council was an Arts Festival held on May 30, 1976 where over one thousand volunteers presented a variety of programs to over five thousand children and adults.

Now, the Waltham Arts Council continues to present a Free Summer Concert series, as well as programs such as Art classes and supporting various artistic endeavors within the community. 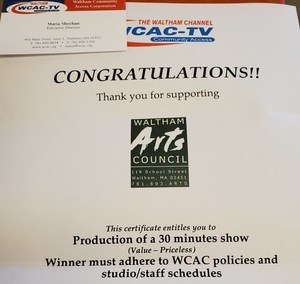 You pick the topic and guests, they produce the show!