Welcome to the Windy City Performing Arts' auction for our Pride 2021 concert "After the Rain." Browse through our concert selections, and then place your bid to "buy" one of our songs. The concert will premiere on our YouTube channel (www.youtube.com/windycitysings) on June 26, 2021, at 7:30pm CT.

This program is partially supported by a grant from the Illinois Arts Council Agency.

Note: The Board of Directors of Windy City Performing Arts retains the right to disqualify bids (and will return any related funds received) from individuals, companies, or organizations that are not in alignment with our mission and values of LGBTQ+ inclusion.

Each ensemble in WCPA performs a variety of musical styles from classical to pop. We pride ourselves on musical excellence regardless of the style of music. The choruses have a history of performing major choral works including special commissioned pieces.

In September 2003, the performing ensembles of WCPA made history by becoming the first choruses in a Gay, Lesbian Bisexual and Transgendered (GLBT) organization to sing the National Anthem at an Illinois professional sporting event, at the Chicago Free Press sponsored “Out At The Ballgame” day at U.S. Cellular Field, opening for the Chicago White Sox vs. Cleveland Indians game.

Our choruses have had a rich and rewarding history. WCPA members have performed with Steppenwolf Theatre and Redmoon Theatre companies, participated in the opening ceremonies of the new modern wing of the Art Institute and have even performed at Carnegie Hall as part of the Susan Komen Sing for the Cure project.

Embedded in the spirit of every performance and outreach event is our mission statement: Windy City Performing Arts sings to inspire change, celebrate diversity, and honor the dignity of the LGBTQ+ community. 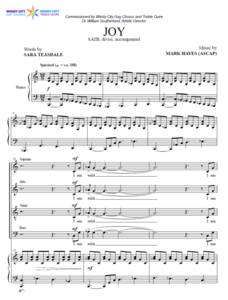