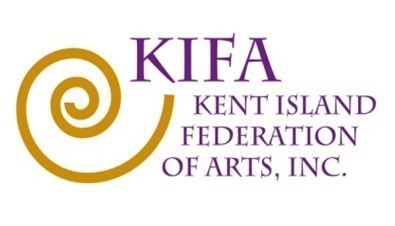 Kent Island Federation of Arts Needs Your Help. The KIFA Organization and Artists like others in the Eastern Shore Arts Community have taken a serious financial hit through the Corona Virus Pandemic. Like other Arts Organizations we had some of our planned for & needed grant money and funds cut. This Auction will be held instead of both our Annual Spring and Fall Fundraisers, which had to be cancelled for this year. This will also be an opportunity for area Artists to showcase their best artwork and hopefully create sales from this event.

Proceeds from this auction will be used to award scholarships to high school students heading to college, as well as for youth and adult art classes and the free monthly exhibits that are open to the public. A portion of the proceeds will also be given to the artist donors who are supporting this event. With the items listed as 100% Donated, all the proceeds will go directly to KIFA’s cause.

About Kent Island Federation of Arts

About KIFA
Kent Island Federation of Arts, or KIFA, was founded in 1963 as a small non-profit community organization, built on making the arts accessible to Kent Island and the surrounding environs.

KIFA’s story began in the 1960s when a number of artist residents, realizing that there was no place locally where artistic work could be exhibited, formed a group to meet and mount annual shows of their work. The first show was in 1962, and by 1972, as a result of the enthusiasm of the original group, the Kent Island Association was formed. In 1979, The Association was officially incorporated as the KENT ISLAND FEDERATION of ARTS (KIFA). With 93 members, KIFA opened its first art gallery on Kent Island in an old house across the street from Christ Episcopal Church in Stevensville.

Exhibit space was limited to two rooms, so in 1983 the gallery was moved to its present location at 405 Main St., in Stevensville. In 1985, KIFA purchased the lovely 1890 Victorian style house and became a landmark in Historic Stevensville. By 1995, with 140 members, and the mortgage paid, KIFA was mounting eleven art exhibits a year with emphasis on art education and service to Queen Anne¹s County. With a membership today of over 200 artists, artisans, craftspersons, and others who love and support the visual arts, KIFA continues to be a staple of the artistic and historic community.

KIFA’s main mission is to provide an opportunity for people of all ages to better appreciate the visual arts and to develop their own creative and artistic skills. We host exhibits as well as hold classes, member events, fun fundraisers, and summer art camps for children. We pride ourselves on friendliness and inclusiveness.