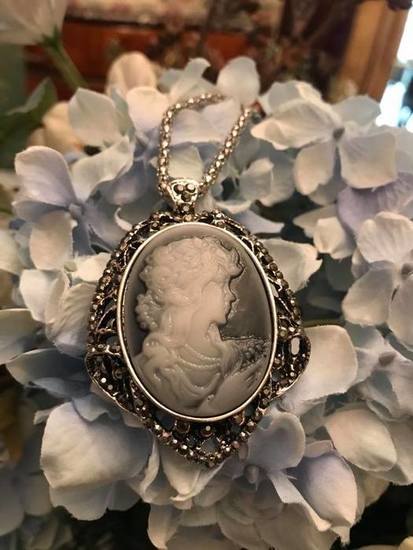 The Hower House Museum's, Cellar Door Boutique is full of hidden gems like those featured in this auction dedicated to jewelry. This June, we are trying out hand at our first ever online auction! The proceeds will help support the Hower House Museum which is celebrating it's 150th anniversary!
Each piece has an unique, fictional depiction to help set the tone and entice your imagination written by our Cellar Door Boutique volunteer, Deb Thomas.

Hower House was completed in 1871 as the new home for wealthy industrialist John Henry Hower, his wife Susan Youngker and their three sons. Hower was active in milling, reaping and the cereal industry. He and Akron architect Jacob Snyder designed this house in the Second Empire Italianate style with a unique floor plan based upon the “Akron Plan” used nationally in churches and Sunday Schools beginning in the late 1800s. This 28-room mansion is capped with a mansard roof and soaring tower and filled with distinctive treasurers and furnishings collected from around the world.
In 1901 Milton Otis Hower—the Hower middle son—along with his wife Blanche Bruot and their two children, Grace and John, came to live in the house. Meanwhile the elderly Mr. Hower and his second wife moved to a smaller home nearby. Blanche upgraded the look and technology of the house and continued to live in the house even after her beloved Milton Otis Hower died in 1916. Some years later Grace Hower and her husband John Crawford moved into Hower House with Blanche. The house was occupied by the Hower family for 100 years before it was deeded to The University of Akron in 1970.
Today Hower House remains one of the best preserved examples of its style in the country, a lasting symbol of a bygone era of elegance. It is supported by private donations, the Hower House Museum Guild (HHMG), and The University of Akron.
Visitors are welcome to view the unique architecture and rare treasures of this National Historic Landmark.