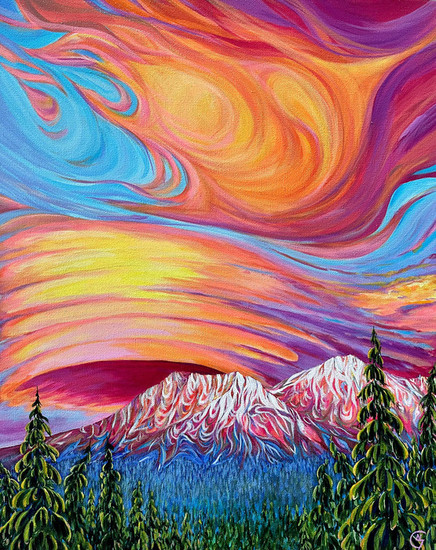 For auction is the original painting by Niki Gatton, "Shasta Ships".

Niki created this painting for Headwaters Trail Runs to use for the 2022 edition of our event poster. Niki says she, "drew inspiration for "Shasta Ships" from the different versions of the lenticular clouds that commonly loom over Mt. Shasta. Lenticular‘s are not unique to just Mt. Shasta but the ones that form over Mt. Shasta are unique to that mountain. This is was what I hoped to capture."

100% of the auction proceeds will be donated to the Mount Shasta High School Cross-Country team.

The Mount Shasta High School cross-country program began in 1996 as an unfunded sport. Over the past 25 years the program has relied solely on volunteer coaching and fundraising efforts by team members and parents. The program has evolved into one of the top high school running programs in Northern California. The team has qualified runners to the state championship meet every year since 2001, including 3 individual state champions, 14 top-ten finishers, and the only brother/sister state champions in 2004. The girls cross-country team dominated Division 5 from 2005 to 2007 with three consecutive team championships.

Niki is a native Californian who lives to spend time outside skiing and mountain biking with her family. Her passion for the outdoors drives her passion to paint. Niki has spent years learning to make paint become the fantasy world that is the mountains. She paints in bold colors, with unique brush strokes, bringing to life the mountain landscapes that are based in reality, but live boldly in her head. She seeks to bring people the joy she feels every time she escapes to a mountain paradise.

Headwaters Trail Runs is a trail running event in Mount Shasta, CA. Each year we donate a portion of our proceeds to the Mount Shasta High School Cross-Country Team.

Headwaters Trail Runs is a project of the Associated Charitable Resource of South Siskiyou (ACORSS) 501(c)(3).