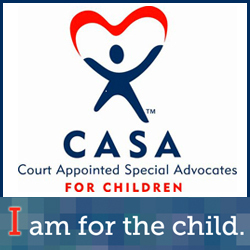 CASA agencies from across Colorado are joining together to raise money through this online auction. The Colorado CASA agencies who donated items by businesses to this auction will receive 100% of the money raised from the sale of those items. The item descriptions will state which CASA agency will benefit from the purchase of that item.

On behalf of the children we serve, thank you for supporting CASA.

In 1977, a Seattle juvenile court judge, concerned about making drastic decisions involving children who had been abused, with insufficient information, conceived the idea of citizen volunteers speaking up for the best interests of abused and neglected children in the courtroom. That first program has grown into a network of more than 950 CASA programs in 49 states and the District of Columbia.

In 1997, CASA was established in Colorado. Local CASA agencies in Colorado are non-profit organizations that train volunteers to serve as a child's voice in court.